„The capacity of production is currently fully booked for the next year. The demand for the pressing of records is huge. It regards not only us, the situation throughout the whole of Europe is similar, „says Jana Březinová, Sales Manager at GZ media (former Gramofónové závody Loděnice).

Currently working full-time for the company GZ media are 1700 employees, and 200 more were taken on according to the needs. In their complex, there is also a pond, a boiler room and a factory chimney. Available for the employees there is also of course a cafeteria and a parking lot. 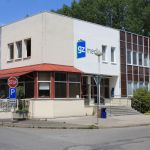 Formerly Gramofónové závody Loděnice, known today as GZ media, is orientated not only towards the production of records. The largest share of production consists of the making of paper packaging.

„Orders from Czech clients represent only a small percentage of our production. Our clients are mostly global corporations such as Samsung, Diago and their packaging for Johnny Walker, Ikea, Cannon, BlackBerry, Hewlett-Packard or also the manufacturer of Norton software – the company Symantec; there are of course many other companies involved as well,“ explains Březinová, adding that when one buys a mobile phone from Samsung, it will most likely be packed in a packing from Loděnice.

GZ media is accordingly a Czech company, which deals primarily with foreign countries. It is therefore substantially represented in England, Scotland, the United States, the Netherlands, Brazil and, for example, in the Paris branch alone. there are four people employed.

Anyone who wants to work in the trade department, according to Březinová, have mastered at least one or two foreign languages, because although the company is located next to the Czech Berounka river, it is, as already mentioned, active in foreign markets. The annual turnover is two billion CZK, the majority of which is used for the manufacturing of packages. On the other hand, the production of LPs, CDs and DVDs represents less than half.

The production of records

The production of records in Loděnice accounts for about one-third of its total production. According to Březinová, it involves much more than merely pressing and placing in a simple inner and outer shell.

„The trend today entails fully equipped sets which contain both the disk and a publication, photos, CDs or also DVDs as a supplement.“

Concerning the production of records, the same can be said with respect to the packaging. This case also concerns a rich clientele such as the global companies Universal Music, Sony, Warner Bros and more.

„I do not want to claim that we are their single supplier, but certainly we are among the main providers,“ Březinová indicates.

She says that the main step for GZ media in the first division began a couple of years ago, when they produced the disc-sets version of the Rolling Stones, which was positively appraised thanks to their quality along with customers and recording studio in Europe, and especially in the United States.

„The issuing of the Rolling Stones brought us, in turn, a few steps higher. This was a very good project, „explains Březinová, indicating the very tough competition in the market for records. Records are pressed but in France, Germany, England, Holland and in Russia, although in Russia it is not quite clear whether the copyright practices are fully upheld.

„Our customers can of course have their records pressed in China or wherever, but they do not do it, because with us, they are guaranteed both the highest quality and the assurance that we really only press that which has been agreed and that we respect the copyright. That is very important,“ asserts Březinová.

She says that the company can afford to do anything else, otherwise they would lose the global CDSA certificate and thus their global clientele. Her assertion also includes the annual inspection of the Content Deliver & Security Association in Loděnice, which grants this certificate. Such an acknowledgement from this association is intended to be an assurance that the companies (that are awarded it) respect copyright.

„We had to submit all possible documents and demonstrate the whole actual production process. We have had to undergo such an audit several times already. It allows us to collaborate with international companies,“ says Březinová.

CDSA certificate requires that the copyright must be checked for each recorded order. 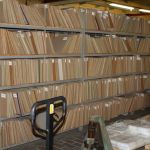 Gramofónové závody Loděnice reached their first “record production” in 1971. There were 12 million records pressed. But Březinová already knows that this recorded number will be overtaken this year, for they expect 13 million (for this year alone).

„In the first half of the year we have, in comparison with last year, taken 30% more orders. We had to work one or two more shifts and also work on weekends,“ says Březinová.

Also interesting is the comparison between the production of CD’s and vinyl records. It had been speculated in the past that the time of records was over, and that CD’s were on top. At this time, approximately 300 000 CD’s were produced daily in Loděnice. Nowadays, everything is different; the production of CD’s is rather insignificant, whereas records represent the number one.

„Today we do, just for the United States alone, a plane every friday with more than 12 tons of records ready,“ says Březinová proudly.

The main production period occurs during Christmas and the Record Store Day Fair, during which small and large producers present their new items annually.

The owner of the company

Jana Březinová mentions no names, but says that the main owner of the company GZ media is the manager of the company. Part of the company is also retained by an American investment fund. Hence, one of the owners is Zdeněk Pelc, who has worked in the company for over 30 years, the last 20 as General Manager. He is considered as the main author of the great success of his company. And this is not simpy a cliché.

In the nineties, Gramofónové závody could have been disbanded, as was the case with many other companies. Fortunately, only a single large claw ripped through Loděnice, and this was as the weaver Sobotka was nationalized by the Communists and made into a record manufacturer.

In a broadcast Zdeněk Pelc recalled the nineties: „It’s true that we’ve seen a lot worse years, notably in the period of wild privatization. Also, we had confronted many attacks from the plundering Huns, as I call them. They tried many strategies and it has cost a lot of worry to get rid of them.“

Such attacks by the plundering Huns were running parts of the so-called large privatization, for, above all by means of repayment-vehicles, many large companies were “privatized” Many of these „successful“ thieves are still alive and most notably have a materially well-ordered life.

„The general strategy was pretty simple. Sell what you could sell and send the rest into insolvency. That was their method, which they had mastered „explains Zdeněk Pelc, noting the basis of what was then called “Tunneling,” which he says he had personally experienced.

„Originally we were part of repayment vehicles from the largest bank in Czechoslovakia. It was impossible to run the company by means of these people, because, even though they were perhaps, in themselves, good people, they did not want to take on any responsibility. That was the first problem. However, the main problem came at the time in which one of them came to with the fact that he owns 60% of the company, and wanted all which was possible of me, and in return promised me mountains of gold,“ says Pelc, who reacted to the new situation by getting the latter thrown out.

Then came a series of plenary meetings of the shareholders with the aim to dismiss Pelc from the company. This struggle around the company went on for almost a year. Pelc and his colleagues had defended seeking a new owner by lodging a complaint. They were accordingly successful and the already mentioned American Investment Fund became the owner.

„When we heard about this fund, we were able to work to recover the company,“ concludes Pelc, who also mentioned his personal relationship with the employees of the company, some of whom have worked for the company for over 20 years.